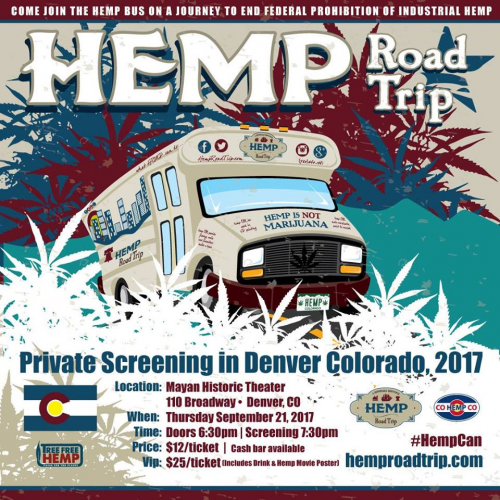 Loveland, CO — (ReleaseWire) — 09/19/2017 –The Mayan Theater was built in 1930, one of only three remaining themed theaters from that Era in the United states. When the theater opened, cannabis was sold nationwide in tinctures, clothing, rope, food and manufacturing inputs. Seven years later, in 1937, America’s first arrest for cannabis possession happened down the street at the Lexington hotel, sending Samuel Caldwell, who sold two cannabis cigarettes, to Levenworth prison for four years!

This theater is going to witness a cannabis revival on Thursday, September 21, 2017, with the pilot screening of the Hemp Road Trip documentary. Over eighty-years in the making, and over eighteen months touring the country, gathering footage of farmers, business persons, state and federal legislators, and everyday Americans, provides the foundation for the feature-length film.

Rick Trojan, a cannabis businessman, investor and advisor, created the Hemp Road Trip in January of 2016 to follow the presidential primaries and attempt to influence candidates to accept industrial Hemp as a viable crop and add it to their national platform. “I was naïve in that I thought in few months we would have the law changed. That obviously wasn’t the case.” That project turned into three more nationwide tours, covering 48 states, Washington D.C. & Puerto Rico. The tour visited all domestic Hemp cultivation states, met with offices of 13 of the 20 Senators on the Judiciary committee, testified before state committees in Kansas, Iowa and Wyoming, and guest lectured at universities across the country. They’ve selected some of these adventures to create the story of their journey from naivete, to education, the push for legalization and call for activation specific to industrial cannabis.

This film highlights how important cannabis was to the spread of civilizations, made illegal by an unconstitutional law, remains illegal for racist and political motives, and needs to be allowed to grow domestically. “It’s simply a matter of education. Everyone that learns about this crop is in favor of domestic production. This movie was created in response to what I see across our country, the need to better understand the history, to become aware of the benefits of cannabis, and to activate our democracy to end federal prohibition of this plant” says Rick Trojan, executive producer of the film.

This event is a private screening to be held at Mayan Theater of 110 S Broadway, Denver, CO on Thursday September 21st. Doors open at 6:30 PM, films screening at 7:30PM and a cash bar is available. The first 100 ticket purchasers get an amazing Hemp gift from Bluebird Botanicals, Nature’s Root, or Tree Free Hemp. “These companies have been with us since day-1! I’m honored to have their products at this special event, and appreciative that they continue to support our educational campaign! The gift bags they’ve setup give our movie goers great examples of the amazing products this crop can create! Only the first 100 tickets get these special gifts, so buy your tickets today!”

Get your tickets now from Hemp Road Trip Facebook page or homepage at www.hemproadtrip.com.