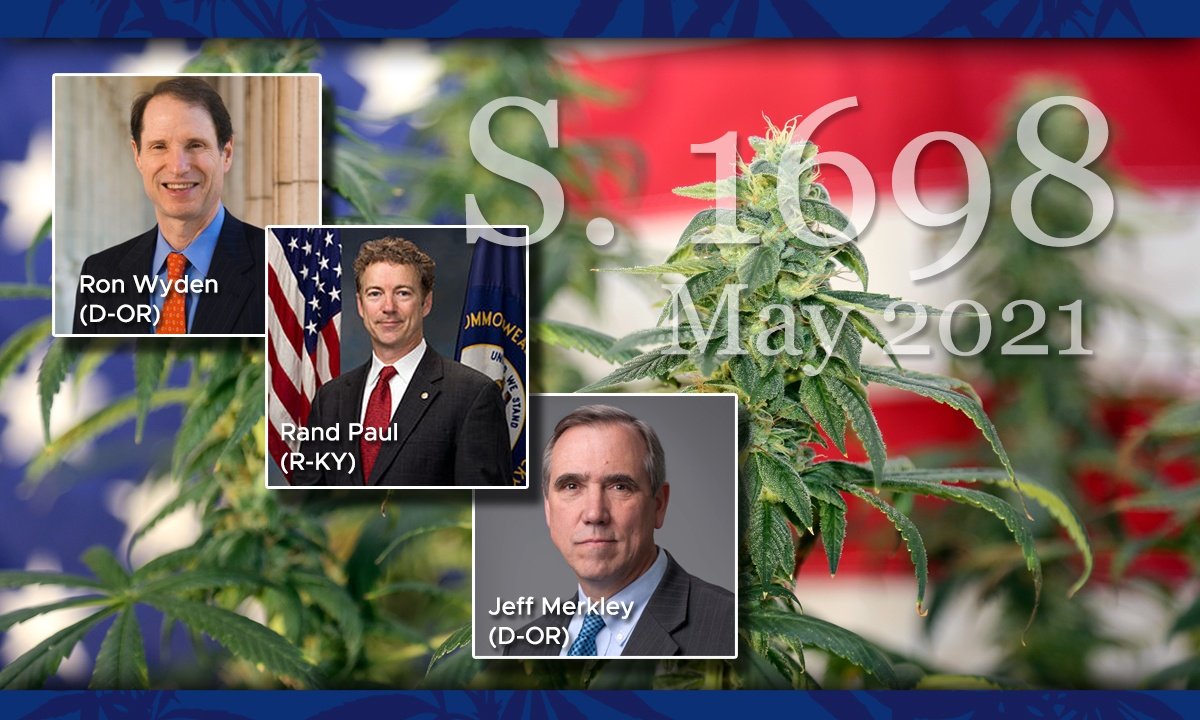 In a bipartisan move, U.S. Senators Ron Wyden (D-OR), Rand Paul (R-KY) and Jeff Merkley (D-OR) on May 19 introduced S. 1698, the Hemp Access and Consumer Safety Act, in the U.S. Senate, a bill that would allow the sale of CBD and other hemp-derived ingredients in dietary supplements and in food and beverage products.

The Senate bill joins H.R. 841  a bill introduced in February 2021 in the U.S. House of Representatives to allow for the use of CBD in dietary supplements only. The Senate version also allows for hemp-derived CBD in food and beverage products.

According to a statement from Sen. Wyden’s office, currently, the Food, Drug, and Cosmetics Act prohibits any new dietary ingredient, food, or beverage from entering the market if it has been studied or approved as a drug. The FDA has the authority to exempt items from this prohibition, however, the agency has yet to exempt hemp-derived CBD, despite Congressional action to legalize its production and sale.

However, FDA, has stated that hemp-based CBD – or cannabidiol – cannot be lawfully marketed in dietary supplements or added to food and beverages because the compound was first studied as a drug and is currently the active ingredient in the GW Pharmaceuticals’ Epidiolex, approved by the FDA to treat certain forms of epilepsy.

According to a summary of S. 1698, the Hemp Access and Consumer Safety Act:

The U.S. Hemp Roundtable encourages hemp industry members to urge their Senators to support S. 1698, the Hemp Access and Consumer Safety Act, and also to contact their Representatives to support H.R. 841, the Hemp and Hemp-Derived Consumer Protection and Market Stabilization Act. For your convenience, you can use a pre-written letter here.

Senator Ron Wyden (D-OR): “CBD products are legally being used and produced across the nation. Yet because the FDA has failed to update its regulations, consumers and producers remain in a regulatory gray zone. It’s been more than two years since I worked with colleagues to have Congress legalize hemp and hemp-derived products. It’s long past time for the FDA to get with the program, for the sake of American consumers and farmers.”

Senator Rand Paul, (R-KY): “Hemp-derived CBD products and businesses have earned their recognition in the marketplace, but the FDA, unfortunately, hasn’t treated them like any other food additive or dietary supplement. The Hemp Access and Consumer Safety Act directs the FDA to regulate hemp products properly and provides a huge relief to hemp farmers, processors, and merchants.”

Sen. Jeff Merkley (D-OR): “Every day that the FDA drags its feet to update its CBD regulations, hemp farmers are left guessing about how their products will be regulated, and real economic gains for workers and business owners in Oregon and across the country are left on the table. Hemp-derived CBD products are already widely available, and we all need FDA to issue clear regulations for them just like they do for other foods, drinks, and dietary supplements.”

Jonathan Miller, General Counsel, U.S. Hemp Roundtable: “We could not be more excited about the successful, bipartisan rollout of S. 1698, which is simply critical for hemp farmers and businesses,” Miller told Let’s Talk Hemp. “The hemp and dietary supplement industries are united behind the bill and we’ve also secured the support of leading food and beverage companies and organizations. What we need now is the help of the grassroots to push this bill to final passage. We encourage all hemp supporters to go to www.hempsupporter.com to send emails to their Senators, urging them to co-sponsor this vital legislation.” In addition, Miller interviewed Sen. Wyden on May 24 on U.S. Hemp TV; you can watch the interview here.

Michael McGuffin, President, American Herbal Products Association: “The leadership of Senators Wyden, Paul, and Merkley in resolving this matter is greatly appreciated. Americans deserve to have assurances that the hemp and CBD products they include in their food and dietary supplement choices are properly regulated. AHPA supports this legislation since it would clarify the lawful pathways for bringing such products to market.”

Eric Steenstra, Executive Director, Vote Hemp: “It is critical that FDA begin regulating CBD products to ensure that consumers are protected and top quality compliant producers are the only ones on store shelves. Hemp derived CBD should be regulated the same as all other food and dietary supplements and we thank Senator Wyden, Senator Paul, and Senator Merkley for their leadership and support.”

Jason Miller, N.D., Cofounder and CEO, HempFusion, and Member of the Board of the U.S. Hemp Roundtable: “We proudly endorse and commend The Hemp Access and Consumer Safety Act and thank Senators Wyden, Paul and Merkley for their bipartisan support. A major component of our strategic business plan has been to prepare for this day and now we are finally at the door of what will open up the CBD industry for those brands that can properly adhere to FDA’s requirements.”

Ola Lessard, Chief Marketing Officer, HempFusion, and President of the U.S. Hemp Roundtable: “While the Senate bill is more comprehensive than the previously introduced House bill H.R. 841, passage of either will provide a vast and very important boost to the hemp industry, benefitting farmers, producers, manufacturers, small and large retailers and, most importantly, consumers. The lack of clear regulation for the past several years has had devastating economic impact across many sectors. It’s also allowed fly-by-night companies to thrive, selling products that don’t meet label claims, aren’t manufactured properly, and – in some cases – are actually dangerous to consumers.”

Patrick Atagi, Board Chair, National Industrial Hemp Council: “Last year, nearly $15 billion in economic benefits were left out of the economy because CBD wasn’t regulated appropriately. If the FDA can’t act, Congress should fulfill its oversight role and pass this legislation. NIHC supports Senators Wyden, Paul, and Merkley’s recognition of hemp and CBD as an ingredient in both food and supplements, and we applaud their legislative approach to ensure that it’s regulated accordingly. This bill will deliver safe products to the marketplace and create a hemp economy that works for everyone.”

Morris Beegle, Cofounder, We Are for Better Alternatives (WAFBA), Producer of NoCo Hemp Expo and Southern Hemp Expo, and Publisher of Let’s Talk Hemp: “As a producer of some of the largest industrial hemp trade shows in the world, we have to have a clear regulatory understanding of hemp-derived cannabinoids as ingredients for dietary supplements, foods and beverages. I have seen first hand over the last several years as this industry has started to take shape how the FDA’s lack of clarity and action has adversely affected the entire supply chain and created a vast amount of state-to-state patchwork regulations regarding CBD and hemp as a whole. The Hemp Access and Consumer Safety Act provides necessary relief to an industry that needs stability to mature. Here at WAFBA, we thank Senators Wyden, Paul and Merkley for championing the benefits of industrial hemp at the federal level, and we appreciate the broad industry support and collaboration around this proposed legislation. This cannot pass through congress and get signed by President Biden soon enough.”

Courtney N. Moran, LL.M., Oregon Industrial Hemp Farmers Association: “We are grateful for the continued leadership of Senators Ron Wyden (D-OR), Jeff Merkley (D-OR), and Rand Paul (R-KY) in advancing hemp policy, creating economic opportunities and broadening protections for our industry stakeholders. This bill is an important step forward not only for the cannabinoid sector, but for the grain and fiber sectors investing in infrastructure to open the food, animal feed, and supplements markets.”

Brian Furnish, Owner, Hempin’ Hill Farm: “I want to thank Senator Paul for being a co-sponsor of the Hemp Access and Consumer Safety Act. This is a much needed step in moving the hemp industry forward. This bill will clarify that hemp byproducts are treated as a food or dietary supplement. Senator Paul has been an advocate for hemp legalization since the very beginning.”

Katie Moyer, Owner, Kentucky Hemp Works: “I am so grateful for Senator Paul’s continued support of the U.S. hemp industry. This bill will take us one step further in ending the Drug War mentality and allow hemp farmers and processors to not only break even, but to flourish in their fields. Current regulations pit state and federal bureaucracies against our farmers, and I’ve never been prouder of my Senator for consistently looking for ways to get government off the farm.”

Derek Selznick, Executive Director, Kentucky Guild of Brewers: “The Kentucky Guild of Brewers would like to thank Senator Paul and all of the other sponsors of this bill. Allowing breweries to use safe products like CBD in beer allows us to continue to innovate and respond to consumer demand by offering new and unique beers. Innovation is at the core of our industry and this is one more way we can further diversify our product portfolio.”

Scott Melville, President & CEO, Consumer Healthcare Products Association: “We strongly commend Senators Wyden, Paul and Merkley for their bipartisan bill which will provide a pathway for CBD to be legally marketed as a dietary supplement. A lawful regulatory pathway will provide long-term certainty in the hemp-derived CBD market and protect consumers from potentially unsafe products.”

Angi Bailey, President, Oregon Farm Bureau: “We are so thankful to both Senator Merkley and Senator Wyden for their steadfast support for one of Oregon’s fastest growing agricultural crops. This important legislation will ensure consumers have access to non-intoxicating hemp and hemp derived ingredients in both food products and dietary supplements. Providing consumers with the assurance that the CBD products they are purchasing are safe and property labeled is of utmost importance to the industry.”

Dawson Hobbs, EVP, Wine and Spirits Wholesalers of America: “The lack of clarity on the legality of hemp-derived CBD products used in foods and beverages has been a significant source of confusion in the marketplace. America’s family-owned wholesalers are federally permitted and regulated businesses that need clarity from federal regulators regarding the legal status of CBD products. We applaud this action directing the Food and Drug Administration to affirm that CBD is legal in dietary supplements, including food and beverages. It will allow America’s wholesalers to continue providing U.S. consumers with the most diverse product selection in the world.”