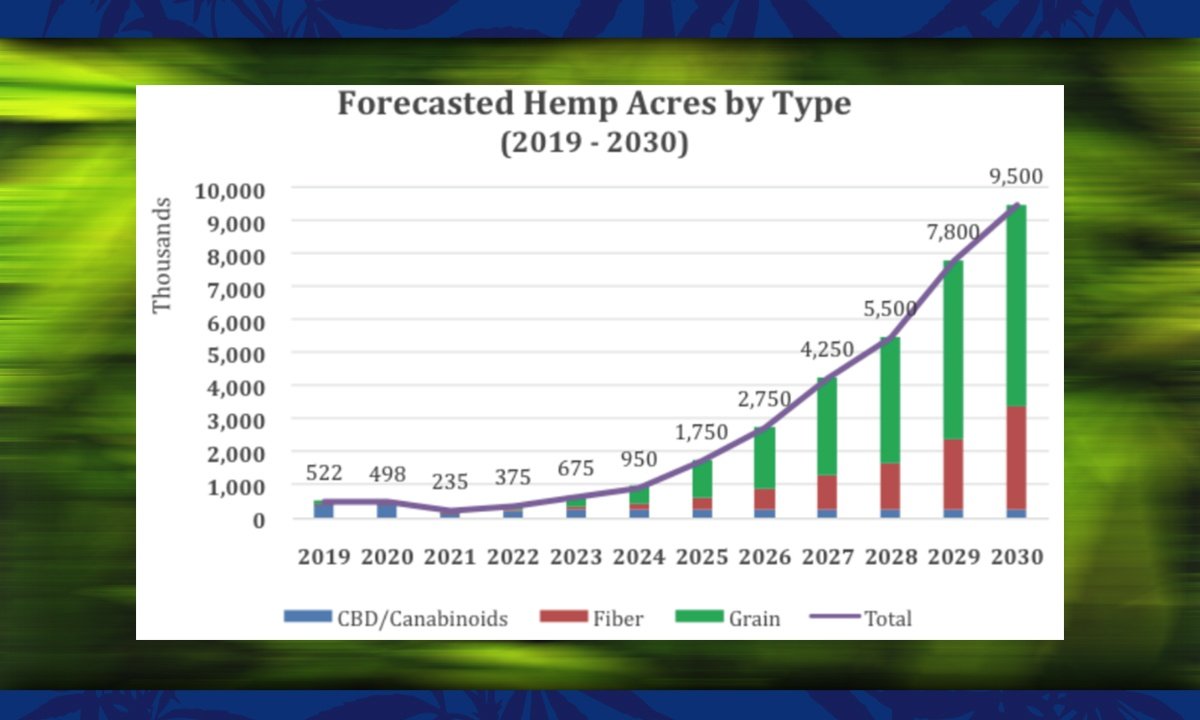 Lost in the data for a glut CBD market in 2021, are promising trends for grain and fiber crops. Photo: Whitney Economics.

Beau Whitney will be speaking at NoCo Hemp Expo during the Investment Forum on March 24, 2022. Purchase tickets here: https://www.nocohempexpo.com/ticket-sales/.

Hemp took a significant step backwards in 2021 in almost all facets of licensing, from acres licensed, to the number of farmers. The pull-back was mainly focused on CBD. The one bright spot was supply and demand for fibers and grain.

Acres Licensed Down to Pre-Farm Bill Levels
Whitney Economics looks at all facets of the supply chain of hemp. On the cultivation side, it examines prices for seeds and clones, it examines the number of acres licensed, planted and harvested. W.E. prefer to examine licensed acres to examine the capacity of the market rather than focus on the snapshot of what was planted or harvested at a particular point in time.

W.E. prefer capacity because it looks at the potential of the supply, versus the demand, because W.E. operate under the assumption that there is a TON of unrealized demand in the market which is not being supported due toa lack of product manufacturers and an excess of uncertainty due to regulatory murkiness.

2021 Acres Licensed Down 55% Since 2019
2021 saw a significant pullback of acres licensed, declining 53% year over year. The main reasons for this pullback being the impact regulatory uncertainty is having on the market and investment, the lack of product manufacturers deploying new products  in the market that would drive demand to farmers and processors and the rapid decline in prices due to over- supply of both biomass and processed materials.

Grain and Fiber Getting Lost in the Narrative, but Look to Surpass CBD Acres by 2025
Given how few acres are allocated to fiber and grain, those two sectors get caught up in the declining acreage narrative dominated by CBD, but demand for fiber and grains have reached their highest points since 2017 and 2018 which was prior to the surge in supply for CBD. Look for fiber and grain acres licensed to surpass CBDacres by 2024 or 2025.

Traditional Powerhouses in a Free Fall
Several of the largest producer states of CBD hemp have seen significant declines in acres licensed since 2019. Oregon has seen the sharpest decline in 2019, decreasing from 64,142 acres to 7,339. In fact, Oregon fell from 2nd place to 9th place and with recent legislative changes recriminalizing parts of the hemp industry in Oregon, Oregon will most likely fall out of the top 10 in 2022.

The Impact of Price on the Market
In addition to regulatory uncertainty, and lack of market access, pricing is playing a major role in farmers and processors’ decision to remain in the market. In many cases, market prices have fallen below the production costs,this has had a significant impact on the value of the capacity in the market.

Oregon Sees Sharp Declines in Market Value for Biomass
Keeping with the Oregon example, the value of the crop in Oregon has declined from $5.5 billion in 2019 to $22.0million in 2021. This is as much a function of price as it is in declining acreage, but this may be a harbinger of things to come for CBD producers in the U.S .in 2019, the value of the Oregon biomass alone, was enough to make it the top agricultural commodity in the state, had the product made it to market.

Numbers of Licenses Issued All Saw Declines in 2021
The level of participation by firms also declined in 2021. This is understandable given the sharp decline in prices and the lack of product manufacturing driving the demand back into the rest of the value chain. While each state has different definitions of what a processor is, the trend is undeniable.

The transition over to green technologies and a renewed focus on ESG by traditional industries is a combination that bodes well for the industry. The keys being Regulatory Clarity, expansion of the hemp product manufacturing sector and the adoption of hemp alternatives into traditional manufacturing industrial complexes. At this time, hemp is a viable alternative in the manufacturing sector, it just needs more orders and output capacity. Hemp Grain acreage demand will increase significantly as hemp for both human and animal consumption is approved and scaled. As that capacity comes on line, there will be more demand for licensed acres.

Conclusion: Expect a Pivot
Despite this decline, as more and more farmers see the potential (albeit less profitable) of hemp fibers and grains, Whitney Economics is forecasting a rebound in licensed acres in the 2022/2023 time frame, particularly as the infrastructure develops and there is an outlet for cultivated and processed items beyond the CBD market. For those farmers who remain in the market, expect to see them pivot over to fiber and grain and also look for traditional farmers to get into the mix as they see the value of hemp as a rotational crop and covet the value of their potential carbon credits.

Not All Doom and Gloom, the Outlook for Hemp is Quite Bright
While the sharp correction in the CBD is stunning, the outlook for hemp remains quite bright. The value proposition hemp has as a commodity, when paired

While those cultivators, processors and product manufacturers who jumped in with both feet in 2019 and 2020 have taken a beating, those who survived and  remained  steadfast  have  better  days  ahead to look forward to. Making sure that demand and a market has been identified in advance of planting will help, as will more regulatory certainty, but despite the stumbling out of the gate post 2018 Farm bill, once the market begins to mature, the future looks bright for the hemp industry.

Beau Whitney is the founder and Chief Economist at Whitney Economics, a global leader in cannabis and hemp business consulting and economic research, and serving as Senior Economist for the National Cannabis Industry Association. Serving an international clientele, Beau is considered one of the leading cannabis economists in the U.S. and globally. Visit www.whitneyeconomics.com.