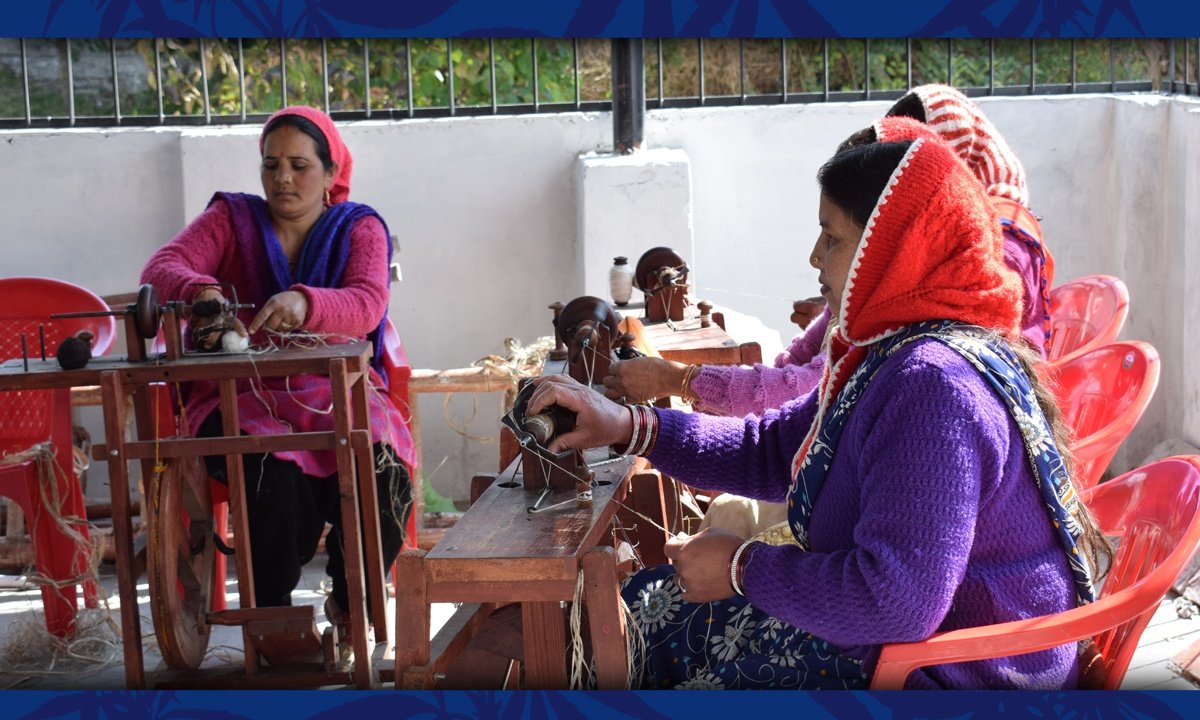 Photo: Women weavers in Uttarakhand, in northern India, are creating heirloom textiles with wild Himalayan hemp through an economic program administered by the Hemp Foundation. Courtesy The Hemp Foundation

Uttarakhand, a northern Indian state in the Himalayan mountains is known as the “Land of the Gods” because of its mountain beauty and the number of Hindu temples built there.

But in 2018, it was also the first Indian state to legalize Industrial hemp cultivation.

Serial entrepreneur Vishal Vivek, who ran multiple IT companies in Deli and Australia, visited the region on vacation and noticed how fiber hemp grew wild in the area, and how the people in ancient mountain villages of Uttarakhand had still not recovered from devastating monsoon floods in 2013.

In 2019, Vivek started the Hemp Foundation to bring hemp as an economic engine to the region, which has been depopulated as residents left for better opportunities in larger cities.

“We engage farmers to grow the hemp and give jobs to artisans to empower women who are the root of the family, and like a tree we make the root stronger,” Vivek told Let’s Talk Hemp.

The foundation helps farmers, who already have traditional knowledge of regenerative farming, navigate the bureaucratic process to acquire hemp licenses. Then the company organizes the processing of hemp.

The goal is to engage 5,000 farmers in more than 200 villages to create opportunities as the potential of hemp in India advances with fiber, textile, bioplastics and other uses, including paper, underwear and biodegradable sanitary pads, Vivek said.

Himalayan hemp, a wild variety, has not yet been approved by the Indian government to pass certification standards for the industry, but the Hemp Foundation is working to cut the red tape.

“As soon as the government approves Himalayan hemp, one million farmers’ lives will be changed in a day,” Vivek said.

Uttarakhand, which borders both Nepal and Tibet, lost almost 6,000 people during June floods in 2013, which washed out roads, bridges and infrastructure and flooded farms and villages. The area is still remote and many villages cannot be reached by road.

Convincing the farmers to return, and restoring the agricultural life of the mountain villages after seven years is the goal of the Hemp Foundation.

Although the organization plans to buy a power loom in the next 18 months, Vivek said the Hemp Foundation believes part of their Indian strength is in the work provided for many people, who enjoy having a job.

“Americans like to automate because the population is very low,” Vivek said. “Our people are happy to have a job. In India, we use manpower instead of augmenting it.”

Vivek believes hemp’s regenerative potential for the earth is part of a path to restore ecological damage caused by the world’s largest polluters, including the United States.

“To make money, we forgot that nature exists,” he said. “We’ve done a lot of damage to nature, and if this generation does not take care of nature, it will be irreversible,” he said.

Providing a hemp alternative to ecologically damaging cotton production and stopping deforestation in India can help push the natural world back into balance, he said.

“We can take care of nature, we can harmonize ourselves to nature,” he said. “The mother [Earth] does not need such a lot of things, she will heal herself,” he added.