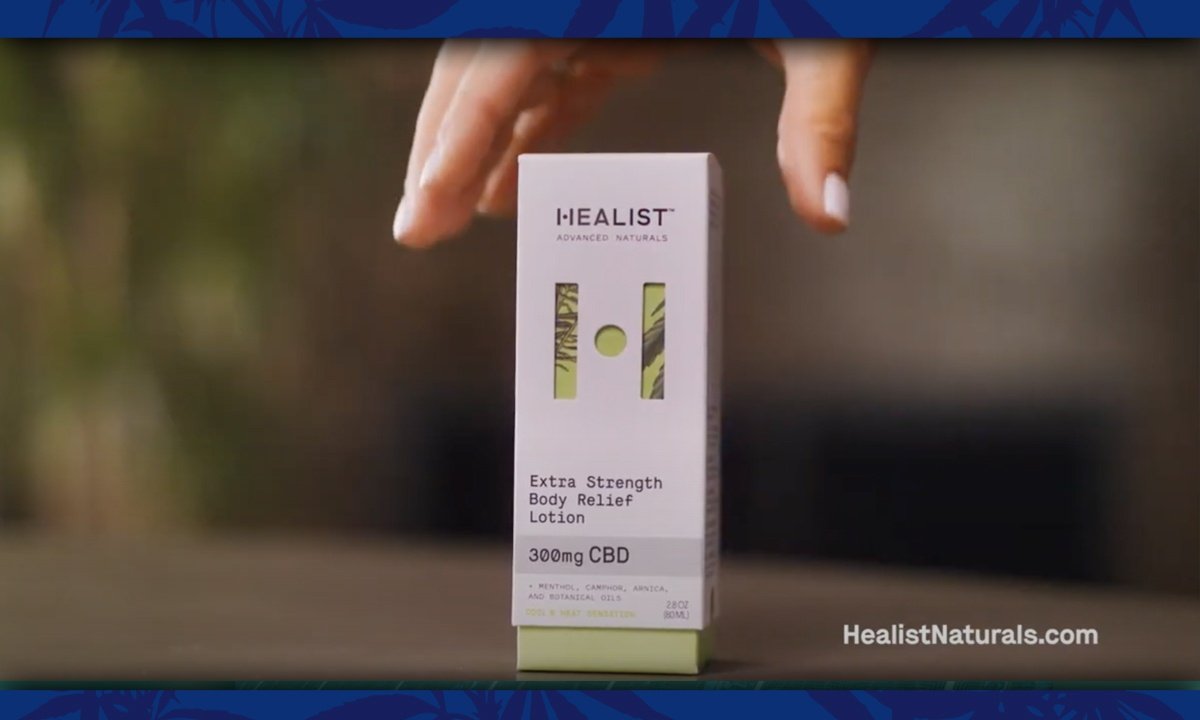 A screenshot from a YouTube television ad for Healist Naturals CBD, including a celebrity endorsement by Olympic volleyball champion Holly McPeak. Photo courtesy of Healist Naturals.

Seen any CBD advertisements on television lately? As CBD becomes more mainstream, television ads are planned for some of the brands you can find in Big Box retailers, and it’s being financed with money from large cannabis investment funds.

Newport Beach, CA-based Kadenwood, LLC announced in June that the plant-based wellness holding company had raised $50 million in a Series B fundraising round, with $20 million worth of “media value” for TV ads that will forward the company’s mission “to normalize CBD in health and wellness products through scale, strategic partnerships and acquisitions.”

Just as with cigarettes and booze, marketing cannabis-derived products through traditional mass marketing channels has been challenging in the United States.

Hemp-derived CBD has also faced a boycott among advertisers — especially from Google Ads, Facebook Ads, Instagram Ads, and Amazon — even though hemp was legalized through the 2018 Farm Bill and CBD has been removed from the U.S. Drug Enforcement Agency’s Schedule 1 narcotics list.

Healist Naturals, A British/U.S. CBD company acquired by Kadenwood, is breaking new ground with television ads for products found on the shelf at Walgreens.

“Kadenwood has secured media spend with some larger TV networks and companies,” Garrett Bain, president of Colorado-based EcoGen BioSciences, a Kadenwood subsidiary, told Let’s Talk Hemp. “The media component allows them to put advertising behind the products and drive foot traffic into the retailers, which drives brand awareness,” he added.

The Healist ads include a “Defend Wellness Manifesto” which doesn’t mention CBD at all. Another ad campaign features a celebrity endorsement from Olympic volleyball medalist Holly McPeak.

Although some newspapers like USA Today and certain online magazines such as Huffington Post, Newsweek, ESPN and Politico have welcomed CBD advertising, mass-market CBD video advertising is a new frontier in hemp. Mainstream television ad markets may present challenges for CBD products.

“There is a general guideline that [cannabis related] ads must focus on spaces where at least 72% of the audience is 21 years of age or older; in addition to this, the ads cannot show consumption or appear to target minors, or make false health claims,” cannabis marketers Oculu said on the company’s website. Digital streaming services, such as Hulu and Roku have a more accepting climate for CBD advertising, the company said.

The year 2021 has seen significant cannabis financial backing for hemp companies, in eye-popping amounts for the humble hemp industry.

“Cannabis investors are an opportunistic cohort,” Morgan Paxhia of Poseidon emailed Let’s Talk Hemp. “Several have been watching the hemp space for years. We see capital flows picking up around hemp post the boom bust of the CBD market.”

“There are a lot of similarities and a lot of differences between cannabis and hemp but one clear underlying theme is growth for years to come,” he added.

Case Study: CBD Products and the “Wild West” of Fraudulent Labels
FDA Objects to CBD Being Sold as a Dietary Supplement; Industry Leaders Speak Out